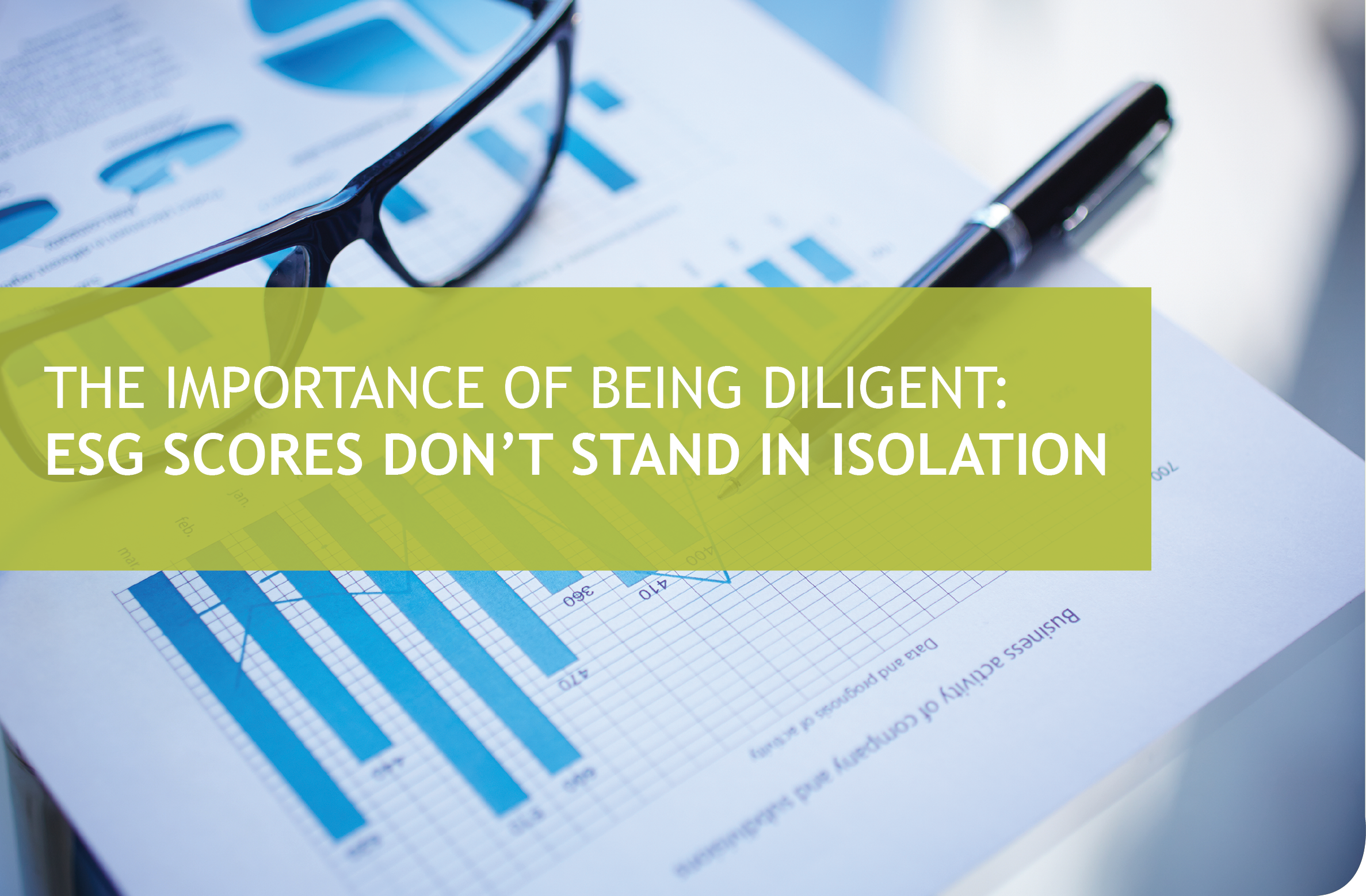 Sustainable investing continues to become a more prevalent choice for investors, with Environmental, Social and Governance (ESG) data providing the critical underpinning for research in the space. There is ample debate, however, about the validity of current ESG scoring as a sole source of decision making for investments.

Ratings agencies have come under scrutiny for scores that often overlook key considerations and rarely tell a uniform story. In fact, as noted in this MIT Sloan article, “research found the correlation among six prominent ratings agencies (KLD/MSCI Stats, Sustainalytics, Vigeo Eiris/Moody’s, RobecoSAM/S&P Global, Asset4/Refinitiv, and MSCI) was on average 0.61. In comparison, mainstream credit ratings from Moody’s and Standard & Poor’s are correlated at 0.99.”

Making a commitment to proper interpretation of those ratings is the key to sustainable investing at Reynders, McVeigh. ESG ratings are a starting point, not a determination. In fact, by considering ESG scores in the context of broader due diligence, investors can better uncover investments that advance ESG issues while remaining positioned for growth.

According to the World Resource Institute, transportation accounts for 30% of greenhouse gas emissions in the U.S. It is a key sector in the fight to improve our environmental position, yet the automotive industry is home to one of the clearest cases of ESG ratings missing the big picture. Tesla, known globally for its role in transitioning consumers away from fossil fuels by vastly reducing emissions associated with its vehicles, comes up short in ESG rating when compared to the more traditional automotive leader, General Motors.

In the energy sector, companies are faced with the challenge of providing real-time solutions to consumers while simultaneously seeking innovations that yield cleaner results. Consider Orsted and NextEra, two companies with different approaches and ESG scores that don’t tell the real story at first glance:

Despite being behind Orsted in the transition away from fossil fuels, S&P Global gives NextEra well above-average grades (86 out of 100), noting that the score “reflects its best-in-class preparedness for disruptive forces in the industry.”

Our research paints a different picture than S&P’s, and it leads down a different path. The context of each company’s journey tells us about their respective commitment to the energy transition – even if the scoring systems don’t reflect that reality. NextEra’s efforts appear anemic by comparison, leading us to believe the company’s commitment to a new energy paradigm is largely symbolic. In fact, a recent Miami Herald article called out the Company for its apparent role in legislating solar out of the conversation for Florida consumers.  “Florida Power & Light, the nation’s largest power company, is pushing to hamstring [solar power] by writing and delivering legislation the company asked state lawmakers to introduce,” noted the article. “For years, FPL has been one of the largest contributors to legislative Florida political campaigns…It backed a failed ballot amendment in 2016 that would have allowed regulators to impose fees and barriers to rooftop solar installation.”

Orsted stands in stark contrast as a modern-day example of “beating swords into plowshares.” The company was recognized this year by the Corporate Knights as the second most sustainable company in the world. The Carbon Disclosure Project gave Orsted an A grade and noted it is the only energy company with a science-based net zero emissions target – and one of only seven companies in the world with such a target.

Which company is a better investment from an ESG perspective?  Assuming the underlying financial fundamentals are sound, Orsted has demonstrated through its overarching mission that it aims to be a significant player in the energy transition. ESG scoring alone misses that story.

Textiles are resource-intensive and receive significant attention from the ESG world. Recognizing which companies are truly pushing for positive change and which are walking a more conservative walk can be a difference maker in investment selection. Such is the case when comparing Interface, which holds a below average ESG rating from S&P, and Owens Corning, which leads the field.

Once again, the ESG score does not accurately capture the environmental profile of these companies. Understanding how Interface is operationalizing its commitment to vastly reduce – in fact, to fully eliminate – its carbon footprint puts the investment in a different light.

Every investment should be considered from all angles. Just as research teams focus on traditional financial factors to gain historical perspective, insight into operational priorities, and gauge strength of balance sheet, they should look at ESG factors to explore how companies are managing non-financial considerations that impact the business. However, understanding how their model and their ESG initiatives reflect broader goals requires more rigorous, independent research.

The ESG ratings industry is fast evolving, and no doubt there will be positive changes that allow for more uniform application of the data. Until that time, however, ESG scores represent a fact check of sorts: they provide a backdrop, but they are not a substitute for due diligence that aligns with our investment philosophy and client goals.